My current WIP features many of the same characters you met in Unkindness Of Ravens. We will be watching as Madeline Abbott enters into more danger and intrigue with the northern California coast mansion she inherits from her parents. What she doesn’t know is there is a great deal of outside interest in this property. There are tales told of hidden gold, a missing old and valuable document and possibly…pirate booty?

When she gets into a jam, and she surely will, will she call on her friend (possibly more than a friend ) Detective Scott Cooper?  How will Madeline get out of the fix she finds herself in: suspected of murder…

The home featured in the upcoming book is based on Kragsyde, an actual home that was built in Massachusetts in 1895. It was a huge, rambling Shingle style home and noted as one of the best examples of its kind.

The Shingle style is an American architectural subset of Queen Anne Victorian. There are certain elements that are common to the style including shingled exteriors, sometimes with the turrets, stone, gables, etc. It is seen often on the east coast, less often on the west and elsewhere. Here is a link to a fine example of a shingle home, originally built for member of the Astor family.

Below is an image of another shingle style home. Although not nearly as large or rambling as Kragsyde or the above home built for the Astors, it is still spacious. Its roofline and massing are very beautiful! No wonder this historic style is so popular among old house enthusiasts. Beautiful covered porch areas to sit back, relax and sip tea. 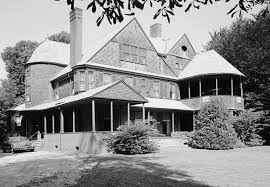 The exterior shingles were expected to weather, that was part of the charm–and painting was unnecessary, so upkeep was reduced. A good choice for coastal homes that would face harsh ocean winds, salt air and heavy rains.